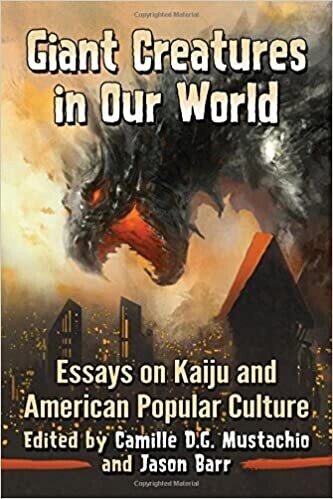 Giant Creatures in Our World: Essays on Kaiju and American Popular Culture (Paperback)

Dismissed as camp by critics but revered by fans, the kaiju or "strange creature" film has become an iconic element of both Japanese and American pop culture. From homage to parody to advertising, references to Godzilla--and to a lesser extent Gamera, Rodan, Ultraman and others--abound in entertainment media. Godzilla in particular is so ubiquitous, his name is synonymous with immensity and destruction. In this collection of new essays, contributors examine kaiju representations in a range of contexts and attempt to define this at times ambiguous genre.

“As Godzilla proved in his ’54 debut, rampaging monsters are to be taken seriously. This collection does just that, examining these cultural giants with the gravity they deserve, but also the fun audiences expect.”―Rod Lott, Flick Attack“A collection of essays as big and impressive as the monsters and heroes it concerns. This anthology will be required reading for fans who love Kaiju, and for scholars who are curious about how our culture views these giant creatures.”―John Kenneth Muir, author, The Encyclopedia of Superheroes of Film and Television.
.

Camille D.G. Mustachio is an assistant professor of English at Germanna Community College in Fredericksburg, Virginia. She is a specialist in medieval and Renaissance literature with research interests in cultural studies, popular culture, and higher education pedagogy. She lives in Richmond, Virginia.

Jason Barr is an associate professor at Blue Ridge Community College. His work has appeared in African American Review, Explicator, The Journal of Continuing Higher Education, and The Journal of Caribbean Literatures, among others. He lives in Harrisonburg, Virginia.

All copies are new.