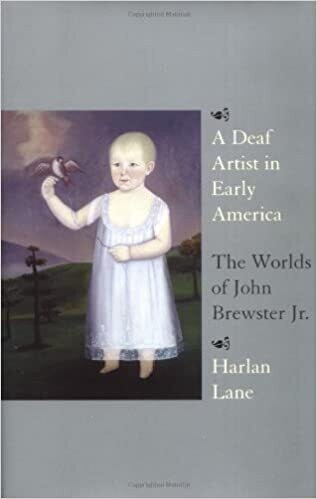 John Brewster Jr. (1766-1854) was one of the most prominent early American portrait painters. His hauntingly beautiful portraits have a directness and intensity of vision that were rarely equaled, as the images in this book attest.

Brewster's portraits have sold astonishingly well at auction, and his work is featured in the collections of prestigious museums, yet curiously little has been written about the life of this deaf artist. Traveling the New England coast to paint the portraits of the merchant class that arose after the Revolution, he lived precisely when a Deaf-World-with its own language, social institutions, and culture-was forming. Harlan Lane, award-winning historian of the Deaf, argues that deaf people are often visually gifted, and that Brewster, as a deaf artist, is part of a long and continuing distinguished tradition.

Lane's unprecedented biography both vividly and comprehensively explores Brewster's worlds: he was a seventh-generation descendant of William Brewster, who led the Pilgrims on the Mayflower voyage; he was a member of the Federalist elite; a Deaf man; and, finally, an artist.

In 1817, at the age of fifty-one, Brewster attended the first school for the Deaf in America, the Connecticut Asylum for the Education and Instruction of Deaf & Dumb Persons. It's extraordinary to imagine that this was the first time he experienced fluent conversation and real social and intellectual exchange. Yet, as Lane notes, Brewster's ambivalence about this minority reflects the difficult choices confronting many Deaf people, then and now.

Including little-known information on the French roots of the American Deaf-World; the Deaf communities of Martha's Vineyard, Maine, and New Hampshire in the nineteenth century; and on contemporary Deaf art, A Deaf Artist in Early America provides a multifaceted glimpse of Brewster, New England history, and the distinctive culture, language, and social institutions of the Deaf in America.

Lane is the first to really delve into the truth of what life might have been like for John Brewster Jr., a deaf artist in the boomtown environment of Federal Period Maine and northern New England. This groundbreaking book will lead to a new understanding not only of John Brewster Jr. but of the roles of artist and patron in early America. -Tom Hardiman, executive director, Portsmouth, Athenaeum (NH)

"This riveting account of John Brewster Jr. will be invaluable not only in Deaf Studies and art history, but also in early American history and the social history of American institutions." -Carol Padden, coauthor of Deaf in America: Voices from a Culture

"The paintings of John Brewster Jr. have long been held in esteem by those interested in early American art, not only for their stark clarity but also for their penetrating characterizations. Students and lovers of American art could read this book for its straightforward history alone, but Lane does much more by providing broad historical context to Brewster's life and art. For the first time, the loose ends of the artist's remarkable life have been synthesized in this accessible book." -David Wheatcroft, eminent dealer in American folk art

"Brewster overcomes his physical limitations only to emerge as a giant on the American art scene centuries later . . . Professor Lane brilliantly captures how Brewster achieved this and why he is deserving of our attention today." -Jay S. Williamson, curator, Historical Society of Old Newbury, Massachusetts

Harlan Lane is University Distinguished Professor in the Department of Psychology at Northeastern University and has received the International Social Merit Award of the World Federation of the Deaf, among numerous other honors. An internationally recognized advocate for the Deaf, the author or editor of nine books on Deaf history, language, and culture, Lane lives in Boston, Massachusetts.
Save this product for later
Display prices in: USD