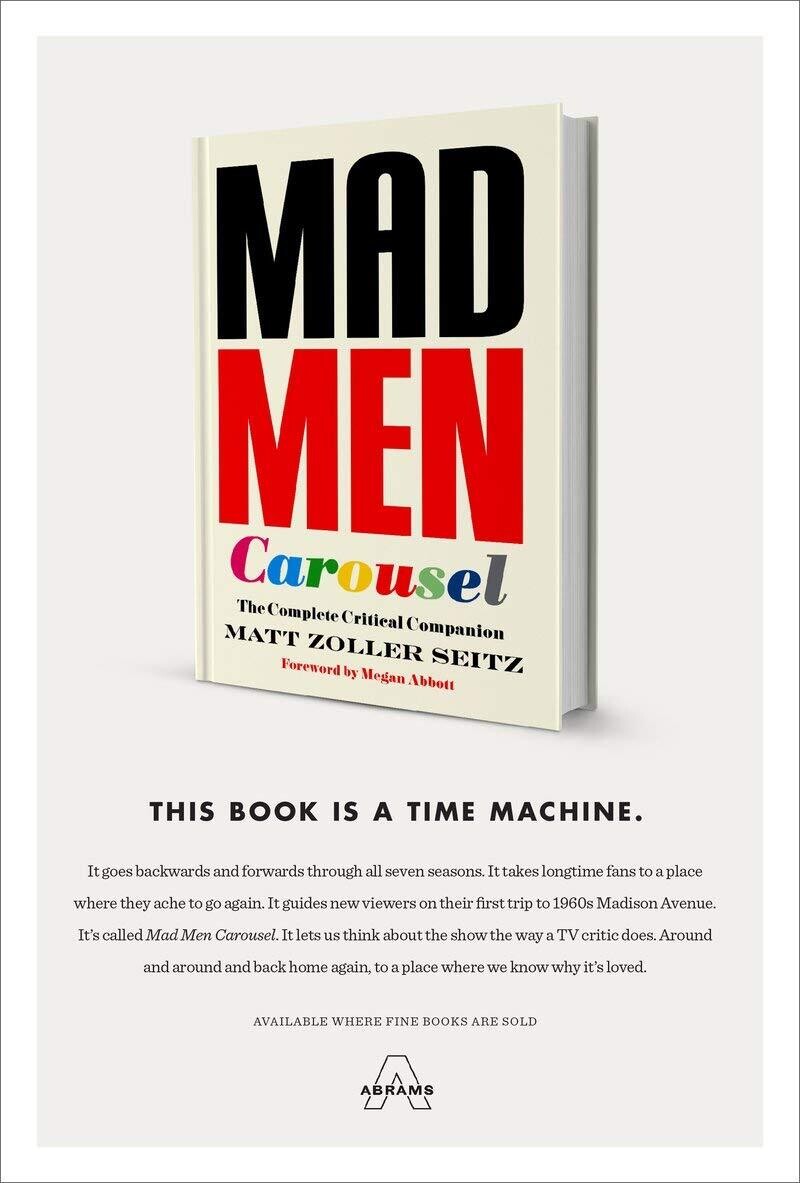 
Each episode review also includes brief explanations of locations, events, consumer products, and scientific advancements that are important to the characters, such as P.J. Clarke’s restaurant and the old Penn Station; the inventions of the birth control pill, the Xerox machine, and the Apollo Lunar Module; the release of the Beatles’ Revolver and the Beach Boys’ Pet Sounds; and all the wars, protests, assassinations, and murders that cast a bloody pall over a chaotic decade.

Mad Men Carousel is named after an iconic moment from the show’s first-season finale, “The Wheel,” wherein Don delivers an unforgettable pitch for a new slide projector that’s centered on the idea of nostalgia: “the pain from an old wound.” This book will soothe the most ardent Mad Men fan’s nostalgia for the show. New viewers, who will want to binge-watch their way through one of the most popular TV shows in recent memory, will discover a spoiler-friendly companion to one of the most multilayered and mercurial TV shows of all time.
.
It's the perfect gift for Mad Men fans and obsessives.
.

"Took me back to the days when you’d actually look forward to your favorite TV hour, the immersive pleasure bath of now what are they going to do?" ( David Chase, creator of The Sopranos)

"In this gorgeous collection of recaps, Matt Zoller Seitz seeks the wisdom within Matthew Weiner’s visionary television show, examining it from every angle, shaking it like a snow globe. A treat for anyone who cares about television." ( Emily Nussbaum, TV critic for The New Yorker)

"Pithy, witty, smart, and from the heart: That’s what we expect from a classic Don Draper pitch, and Matt Zoller Seitz captures all of these qualities in his must-read Mad Men recaps." ( Maureen Ryan, TV critic for The Huffington Post)

"Matt Zoller Seitz writes about television more passionately and compellingly than any other critic writing today. With Mad Men, he’s found his Shangri-La. Mad Men Carousel is essential reading for fans like me, who eagerly awaited his trenchant and witty analyses almost as much as the groundbreaking show itself. Thought-provoking and wildly entertaining, this brilliant collection of essays makes me want to revisit all seven seasons of the greatest American television show ever produced." ( Robert Falls, artistic director of Chicago’s Goodman Theatre)

"I envy anyone who has never watched Mad Men and gets to experience it for the first time with the invaluably perceptive Matt Zoller Seitz close at hand. For the rest of us, this addictive and rewarding deep-dive into every episode is an irresistible reason to revisit a great series." ( Mark Harris, author of Pictures at a Revolution: Five Movies and the Birth of New Hollywood and Five)

Matt Zoller Seitz is the TV critic for New York Magazine, the editor-in-chief of RogerEbert.com, a finalist for the Pulitzer Prize in criticism, and the author of the New York Times bestsellers The Wes Anderson Collection (Abrams, 2013) and The Wes Anderson Collection: The Grand Budapest Hotel (Abrams, 2015), as well as the forthcoming The Oliver Stone Experience (Abrams, 2016). He is the founder and original editor of The House Next Door, now a part of Slant Magazine, and the publisher of Press Play, a blog of film and TV criticism and video essays.

A Brooklyn-based writer and filmmaker, Seitz has written, narrated, edited, or produced more than a hundred hours’ worth of video essays about cinema history and style for The Museum of the Moving Image and The L Magazine, among other outlets. His five-part 2009 video essay, “Wes Anderson: The Substance of Style,” was later spun off into The Wes Anderson Collection, and his 2008 video essay series “Oliver Stone: The Official History” is the partial basis for The Oliver Stone Experience.

Megan Abbott is the Edgar®-winning author of the novels Queenpin, The Song Is You, Die a Little, Bury Me Deep, The End of Everything, Dare Me, and her latest, The Fever, which was chosen as one of the Best Books of the Summer by the New York Times, People magazine, and Entertainment Weekly, and one of the Best Books of the Year by Amazon, National Public Radio, the Boston Globe, and the Los Angeles Times.

Her writing has appeared in the New York Times, Salon, the Guardian, the Wall Street Journal, the Los Angeles Times Magazine, the Believer, and the Los Angeles Review of Books. Abbott is also the author of a nonfiction book, The Street Was Mine: White Masculinity in Hardboiled Fiction and Film Noir, and the editor of A Hell of a Woman, an anthology of female crime fiction. She has been nominated for many awards, including three Edgar® Awards, the Hammett Prize, the Shirley Jackson Prize, the Los Angeles Times Book Prize, and the Folio Prize. She lives in New York City.

Max Dalton is a graphic artist living in Buenos Aires, Argentina by way of Barcelona, New York, and Paris. He has published a few books and illustrated some others, including The Wes Anderson Collection (Abrams, 2012) and The Wes Anderson Collection: The Grand Budapest Hotel (Abrams 2014). Max started painting in 1977 and since 2008, he has been creating posters about music, movies, and pop culture.

All copies are new and come direct from the publisher’s warehouse.
Save this product for later
Display prices in: USD