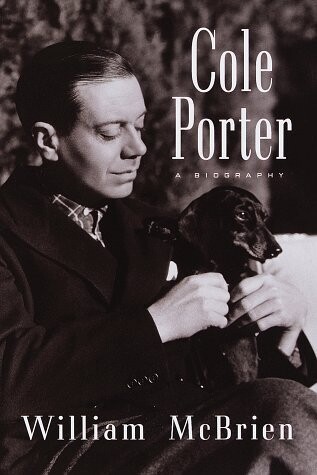 The most richly told biography we have had of one of the most important and beguiling composer/lyricists of the century--the incomparable Cole Porter, whose songs were the essence of wit and sophistication and whose life was marked by tragedy, courage, sorrow, and secrecy.
Biographer William McBrien reveals the private Porter: his privileged Indiana youth (he composed his first song at ten). He went East to boarding school and to Yale, where he wrote the football anthems "Hail to Yale" and "Bull Dog," and show after show in which many of his classmates appeared--among them, Archibald MacLeish, Gerald Murphy, Dean Acheson, and Averell Harriman. Then a brief, unhappy stint at Harvard Law School. Off to Paris at twenty-six, and in crisis joining the French Foreign Legion during the First World War. Two years later, Cole Porter had his first Broadway hit.
William McBrien's biography, the result of ten years of work and bursting with stories and scenes of Porter's life, takes us beyond the patina of Porter's very public career, beyond the high and low aristocratic worlds of Venice (Porter with Elsa Maxwell in 1923 together put Venice back on the map as the place to be), beyond the opulent parties and costume balls on two continents he not only attended but threw himself--and made into an art form. McBrien takes us into Porter's seemingly conventional marriage to reveal his complicated emotional life--the lost, privileged man who had a wild, irrepressible talent to amuse but at first find couldn't find his voice; the man who married "the most beautiful woman in the world," the very social, very southern Linda Lee Thomas, but who preferred his own sex. He had long relationships as well as frequent dalliances with many men but for thirty-five years maintained a loving marriage to the woman he truly adored.
We see the supremely gifted Porter who created twenty musicals on Broadway (Anything Goes, DuBarry Was a Lady, Gay Divorce, Born to Dance), writing for such stars as Ethel Merman, Fred Astaire, Mary Martin, Bert Lahr, and Bea Lilly; and who gave Hollywood Fifty Million Frenchmen, The Gay Divorcee, Rosalie, Broadway Melody of 1940, Night and Day, High Society, Silk Stockings, Can-Can, and Kiss Me, Kate.
Porter was "the top" and lived at the top, but his life was catastrophically transformed after a near-fatal horseback-riding accident. The thirty-one operations during the next eighteen years brought on increasing pain, and the growing paralysis that darkened his life was never hinted at publicly nor in his work.
Interweaving the life and the music, McBrien shows us a man whose genius as a composer flowered in deceptively simple melodies that were thought to be completely modern but today are considered ingenious, complicated, and steeped in the nineteenth-century tradition of lieder; a composer whose craft concealed complicated solutions to musical problems while it enchanted his audiences. And we come to understand how Porter's doubts and desires, longings and infatuations, insinuated their way into the heart of his incomparable words and music.

The wit, sophistication and often-surprising depth of feeling in the music and lyrics of Cole Porter are at last fully realized in this latest of the songwriter's many biographies. Making illuminating use of previously unpublished material at Yale and at the Cole Porter Trust, McBrien (Stevie: A Biography of Stevie Smith) weaves a complex and groundbreaking portrait of Porter, interspersed with lyrics and 72 illustrations, recounting his affluent upbringing in Peru, Ind., and his emergence in the 1930s as the musical theater's reigning sophisticate. A delicious chapter on the making of Kiss Me Kate in 1948 demonstrates what sharp talons were needed to create a hit. But McBrien's most startling scholarship is on the subject of Porter's homosexuality. Although Porter's marriage remained sexless, he and his wife Linda were the most intimate of soulmates, says McBrien. He traces the early years of their marriage in the expatriate Europe of the 1920s?during which time Linda would meet and approve Porter's male lovers?through their older years in postwar Broadway and Hollywood, when Linda's respiratory illnesses and Porter's paralyzed legs racked their bodies but not their spirits. Never-before-seen letters shine light into Porter's ongoing relationships with Ballets Russes star Boris Kochno, architect Ed Tauch, choreographer Nelson Barclift, director John Wilson, and longtime friend Ray Kelly, whose children still receive half of the childless Porter's copyrights. In previous biographies by George Eells and Charles Schwartz, these men are passing references; here, they are three-dimensional figures, as McBrien locates the psychological roots of Porter's love songs in his unrequited love for the men he could have but not forever. In the tradition of Anthony Heilbut's Thomas Mann: Eros and Literature and Patrick McGilligan's A Double Life: George Cukor, this astute biography will help to create a standard-setting portrait of Porter as a homosexual artist in a heterosexual world.

Used book in fair condition; some water warping in the back, though pages are clean and readable.