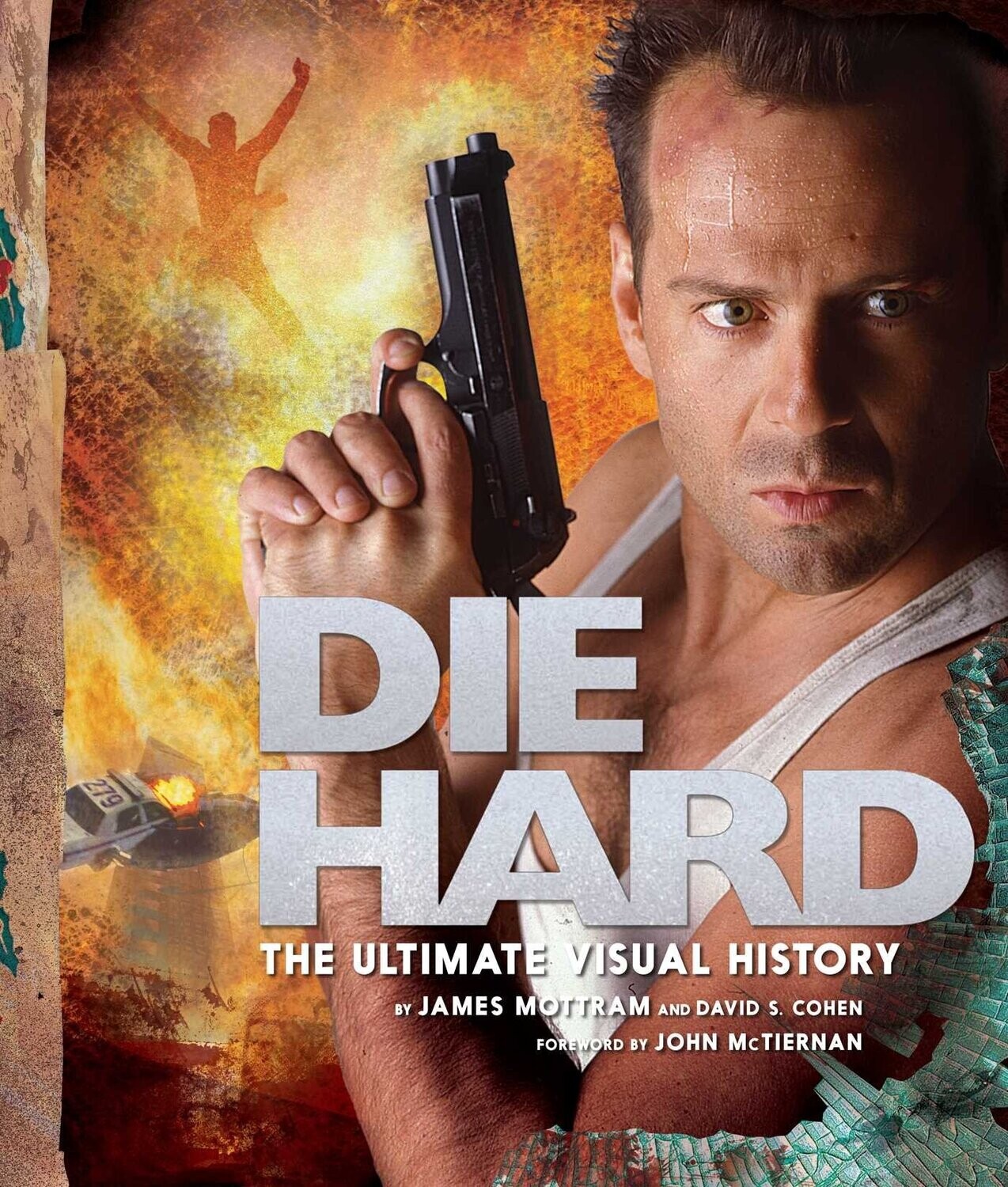 Yippee-ki-yay . . . Discover the explosive story behind the creation of the Die Hard saga in this visually stunning, behind-the-scenes look at the adventures of detective John McClane.

Thirty years after the release of the groundbreaking action film, Die Hard: The Ultimate Visual History takes an in-depth look at the entire Die Hard saga, from the original movie through to the hit sequels, comics, video games, and other extensions of hero John McClane’s story.

Loosely based on Roderick Thorp’s novel Nothing Lasts Forever, Die Hard, released in 1988, saw Moonlighting star Bruce Willis seamlessly make the transition from TV success to movie stardom in a film so taut, explosive, and full of suspense that it would come to define the action movie genre for decades to come. Directed by John McTiernan (Predator), Die Hard also starred revered British stage actor Alan Rickman who turned lead villain Hans Gruber into a presence so deliciously malevolent, audiences didn’t know whether to love him or hate him.

For the first time, Die Hard: The Ultimate Visual History tells the complete story of the making of Die Hard and its sequels, through exclusive interviews with the cast and crew of each film and a wealth of rare and unseen imagery, including set photography and concept art. Also exploring Die Hard comics, video games, and other merchandise, this book will tell the full story of the saga and its remarkable thirty-year legacy.

"Forget about ‘behind the scenes’—Die Hard: The Ultimate Visual History goes not only behind the scenes, but behind the curtain, inside the sausage factory, and into the room where it happened. A must-have for not just fans of the Die Hard franchise, but for any student of contemporary filmmaking!"
-- Steven E. de Souza, screenwriter, Die Hard and Die Hard 2

"The research and passion put into this book by its authors is obvious and impressive. This is the kind of work that can serve as a coffee table conversation piece or an intimate part of your home library." ― Geeks of Doom

“The book is magnificent—destined to become a cornerstone of future critiques and appreciations. The most complete reckoning of the insane energy and selfless teamwork of all concerned in the creation of the most beautiful, satisfying and downright fun motion picture of the hands-on era of filmmaking and its fascinating children.” -- Jackson De Govia, Production Designer, Die Hard and Die Hard with a Vengeance

“It’s rare to find the truly definitive work on a piece of hugely influential pop culture—this is that book. For any fan of modern American cinema, let alone Die Hard fans, this book provides the genuine story of the blood, sweat and many tears that went into creating and perpetuating a giant American icon. The book resonates with the authenticity that making the great action movies of the 1980’s required, and sets these movies in stark contrast to the cookie-cutter superhero toy advertisements that pass for entertainment today." -- John Moore, director, A Good Day to Die Hard

“...a fantastic holiday gift for any movie fan.” ― Men’s Journal

"It's a museum in a book... the most comprehensive Die Hard book" ― IGN

"This definitive guide to one of the greatest action-movie franchises of all time is more than just a gift for fans. It’s a win for anybody who loves beautifully-crafted books." ― Wonder Alliance

"What a wonderful look back on the early days of my career. Kudos to the writer as well as all involved!" -- Reginald VelJohnson (Sergeant Al Powell), Die Hard/Die Hard 2

"Since Die Hard is totally a Christmas movie, The Ultimate Visual History would make a great Christmas gift for the cowboy in your life." ― We Live Entertainment

James Mottram is a film critic, journalist and author. He has written several books on cinema, including The Making of Memento, The Sundance Kids, and The Making of Dunkirk, and contributed to numerous critical anthologies on everything from Japanese cinema to war movies. He lives in London.
David S. Cohen has covered show business for 15 years, including more than a decade writing about visual effects for the entertainment bible, Variety. He is the longtime writer of Script Magazine's popular "From Script to Screen" series, and his previous book, Screen Plays, is a collection of those articles about the vicissitudes of Hollywood script development. He lives in Los Angeles.
Save this product for later
Display prices in: USD