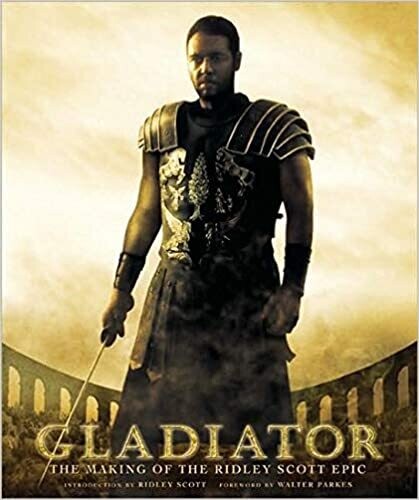 Gladiator: The Making of the Ridley Scott Epic (Paperback, USED)

Director Ridley Scott (Blade Runner, Thelma and Louise, Alien) brings the glorious battles of the ancient Roman arena back to the big screen. Set against the splendor and barbarity of the Roman Empire in AD 180, Gladiator tells an epic story of courage and revenge: The great Roman general Maximus (Russell Crowe) has been forced into exile and slavery by the jealous heir to the throne, Commodus (Joaquin Phoenix). Trained as a gladiator, Maximus returns to Rome, intent on avenging the murder of his family by Commodus, now emperor. The one power stronger than that of the emperor is the will of the people, and Maximus knows he can attain his revenge only by becoming the greatest hero in all the Empire. Russell Crowe heads up an international cast that includes Joaquin Phoenix, Connie Nielson, Oliver Reed, Derek Jacobi, Djimon Hounsou, and Richard Harris. Directed by Ridley Scott from a script by David Franzoni and John Logan, Gladiator is produced by Franzoni, Douglas Wick, and Branko Lustig, with Walter F. Parkes serving as executive producer.

Historians not affiliated with the movie Gladiator praise it as the most realistic depiction of Roman combat ever committed to celluloid. Gladiator: The Making of the Ridley Scott Epic illustrates how the filmmakers achieved that authenticity. It's the official tie-in, and one of the handsomest movie books Newmarket Press has ever produced. (No, it's not as fancy as The Art of the Matrix, but it's not that kind of massive book--this one is for the howling yet discerning fans in the cineplex coliseum.) The filmmakers explain how they coped with the considerable weight of Roman movie tradition--"Transcending the Toga," they call it--mostly by drawing their inspiration more from Gérôme's 1872 gladiator painting Pollice Verso ("Thumbs Down"), an evocative rendering of the life-or-death drama subject to the emperor's whim. Ridley Scott is famous as a director (the modern equivalent of an emperor), but he started out as a painter at London's Royal College of Art, and his training has served him well.

Adult/High School-An intriguing look at the Academy Award and Golden Globe-winning film. "Raising the Roman Empire" covers the background of the film, from its original conception and development to set design and the re-creation of the Colosseum. Short interviews with the principal actors include their takes on their respective characters and the actual history behind the story. "A Dream That Was Rome" uses narration, script excerpts, storyboards, and stills to describe the film's action. The entire book is lavishly illustrated with photos, production drawings, and reproductions. The design is attractive and lends itself to browsing. Readers will find many interesting facts, especially about the costumes (Russell Crowe's armor had to be duplicated 12 times) and the visual effects (extras were shot against a green screen and multiplied in the computer for the Colosseum crowd shots).
Susan Salpini, Fairfax County Public Schools, VA