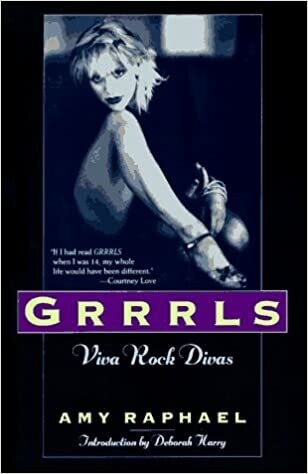 Courtney Love: "I rely a lot on sexual metaphors-food as sex, music as sex, fucked-up weird insane sexual vistas that haunt me and make me feel as though I were going insane sometimes."

Bjork: "I have always had a certain song in my head, a certain chemistry of sounds."

A journalist from across the pond, Raphael combines interviews with 14 contemporary female rockers, with overviews of each and an introduction that gives her stance on women in rock. It's a good thing. While few American readers will recognize the U.K. interviewees, Raphael snags extensive commentary from Stateside hotshots Courtney Love, Liz Phair, Kim Gordon and Tanya Donnelly as well as reigning international pop sprite Bjork. Raphael's introduction suffers from impeachable feminist flag-waving and noncritical hyperbole (in re rocker Kurt Cobain's 1994 suicide, she claims that "With a single bullet, Cobain defined a generation"). Her essay format for the interviews eliminates her own questions, but repetitive answers reveal a formulaic approach, especially concerning singer/guitarist Juliana Hatfield's infamous and now-rescinded remark that women aren't built to play guitars. Despite her indulgent reprinting of old news (she allows Love to read pages of Meeting the Madwoman into the mike, although Love has mentioned it in other interviews) and rambling tangents (Phair starts pontificating about the GNP), Raphael does manage to get these women talking in good ways: Love describes her climb from muse to musician, Nina Gordon recalls her realization that playing music wasn't solely her big brother's turf and Kim Gordon comments beautifully on the physicality of performing rock and roll. This book may have a hard time competing with the other female rocker tomes recently come to U.S. shelves, but fans will own them all.
Copyright 1996 Reed Business Information, Inc.

The issue of gender in the field of rock music raises some intriguing questions about equality, feminist thought, and other such matters. Along these lines, Raphael offers portraits of 12 female rock artists who hit their stride in the 1990s, examining the texture of their lives and their music. Included in this group are Bjork, Liz Phair, Ellyot Dragon (Sister George), and Courtney Love. The author's brief background on each artist serves as ample introduction to what follows?narratives "spoken" by each woman, revealing their personalities with astonishing clarity. The text is sprinkled with many references to rock and punk and is often quite explicit. While well researched, this book will probably not appeal to an audience whose tastes do not lean toward this type of music or toward the avant-garde in general. Recommended for large entertainment collections.?Carol J. Binkowski, Bloomfield, N.J.

Raphael takes a look at some emerging forces in rock music who happen to be women--household names like Courtney Love and Liz Phair as well as less famous, equally interesting rockers like Kim Gordon (of Sonic Youth) and Pam Hogg (of Doll). Raphael devotes each chapter to a single artist or act, setting the stage and occasionally asking questions to kick things along but generally giving the featured woman's story in her own words. That musicians as dissimilar as Love and Phair appear thematically bound in the same book is no doubt due to lingering sexism in the rock marketplace where, for reasons Raphael and her subjects consider at due length, a woman is still considered something of an oddity. Giving, then, a disparate group of musicians a platform to express their views on music, the nature of fame, and life in the media fishbowl, Raphael forthrightly examines the sexual politics of rock and some of the most vital contemporary musicians. Mike Tribby

"If I had read GRRRLS when I was 14, my whole life would have been different." -- Courtney Love

Amy Raphael has been writing about music for the past ten years, moving on from fanzines to join the staff of The Face in 1990. After a year as Features Editor for Elle magazine, she is now a freelance journalist working for the NME, The Guardian, The Observer, The Face and Elle.

Copy is USED and in Good condition, shelf and typical wear on cover of a used book.