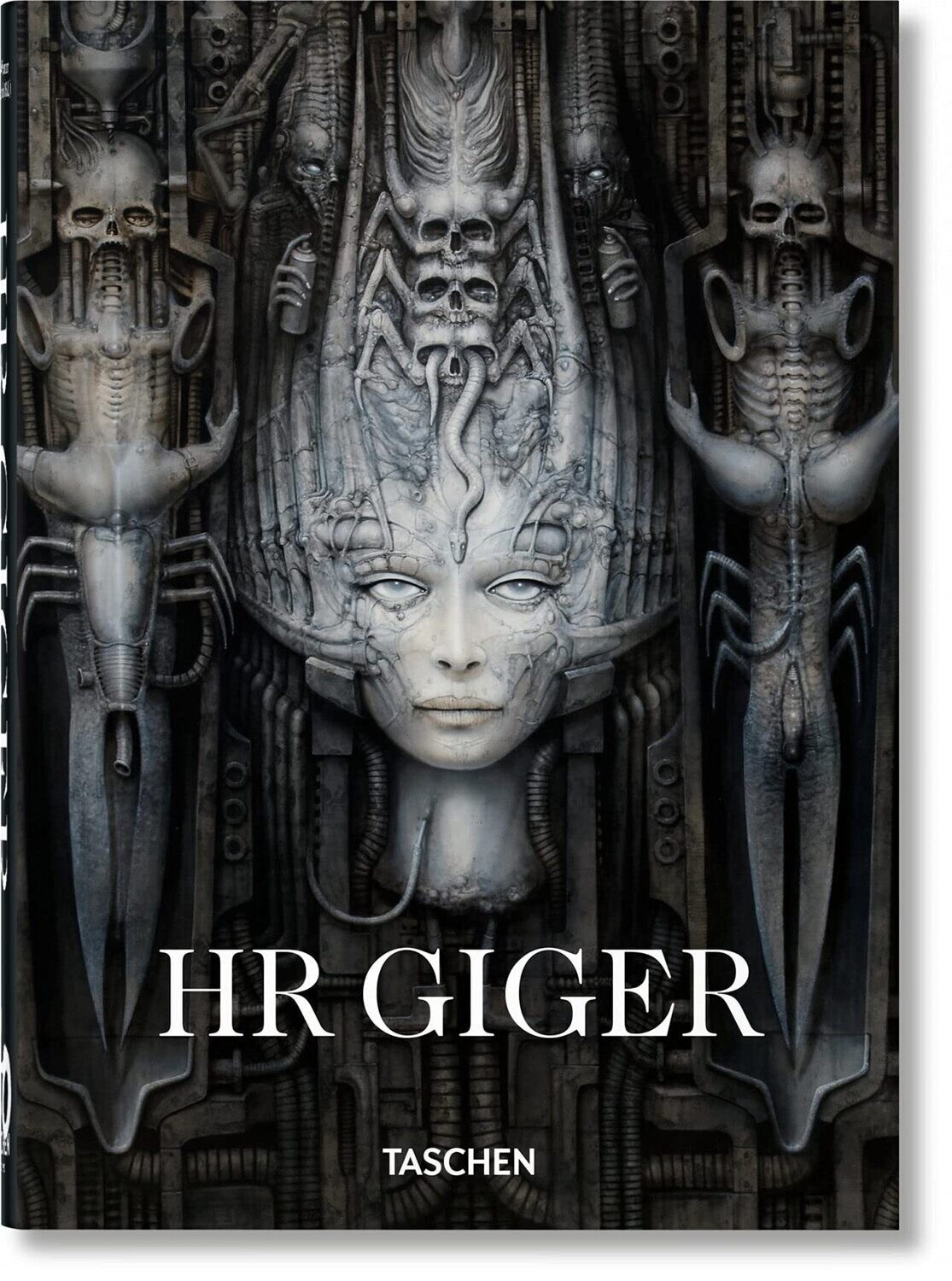 “At its essence, Giger’s art digs down into our psyches and touches our very deepest primal instincts and fears. His art stands in a category of its own. The proof of this lies in the intensity of his work and imagination, which I can only compare to Hieronymus Bosch and Francis Bacon in their powers to provoke and disturb.” ―Ridley Scott

Swiss artist HR Giger (1940–2014) is most famous for his creation of the space monster in Ridley Scott’s 1979 horror sci-fi film Alien, which earned him an Oscar. Yet this was just one of the most popular expressions of Giger’s biomechanical arsenal of creatures, which consistently merged hybrids of human and machine into images of haunting power and dark psychedelia. The visions drew on demons of the past, as well as evoking mythologies for the future. Above all, they gave expression to the collective fears and fantasies of his age: fear of the atom, of pollution and wasted resources, and of a future in which our bodies depend on machines for survival.

Following the SUMO-sized monograph which was begun shortly before the artist's unexpected death, this affordable anniversay edition pays homage to Giger’s unique vision. The book shows the complete story of Giger’s life and art, his sculptures, film design, and iconic album covers as well as the heritage he left us in his own artist’s museum and self-designed bar in the Swiss Alps. In an in-depth essay, Giger scholar Andreas J. Hirsch plunges into the themes of the artist’s oeuvre while an extensive biography draws on contemporary quotes and Giger’s own statements.

TASCHEN is 40! Since we started our work as cultural archaeologists in 1980, TASCHEN has become synonymous with accessible publishing, helping bookworms around the world curate their own library of art, anthropology, and aphrodisia at an unbeatable price. Today we celebrate 40 years of incredible books by staying true to our company credo. The 40 series presents new editions of some of the stars of our program―now more compact, friendly in price, and still realized with the same commitment to impeccable production.

Andreas J. Hirsch, born 1961 in Vienna, is an author, curator and artistic photographer. His writings include books on Pablo Picasso, Tina Modotti, Friedensreich Hundertwasser and HR Giger. From 2009 to 2014, he was curator at the KunstHausWien and organized exhibitions on Henri Cartier-Bresson, Linda McCartney and HR Giger, among others.

Hans Werner Holzwarth is a book designer and editor specializing in contemporary art and photography. His TASCHEN publications include the Collector’s Editions Jeff Koons, Christopher Wool, Albert Oehlen, Ai Weiwei, and the David Hockney SUMO A Bigger Book, as well as monographs like the XXL-sized Jean-Michel Basquiat.

HR Giger (1940–2014) was a Swiss painter, sculptor, and designer, who combined surrealist influences and dark fantasies to create his very own biomechanical universe. He first received acclaim in the 1960s with his airbrushed fantasies of post-apocalyptic creatures and landscapes, and rose to fame through high profile movie work, most notably the creation of the monster in Alien, which won the Academy Award for Best Visual Effects. HR Giger was named in the Science Fiction and Fantasy Hall of Fame in 2013.