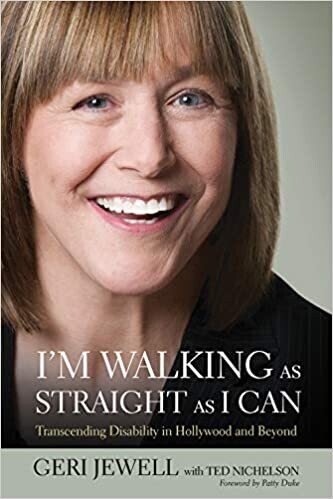 ‎I’m Walking As Straight As I Can: Transcending Disability in Hollywood and Beyond (Paperback, USED)

Born with cerebral palsy, Geri Jewell inspired a generation of young people when she became the first person with a disability to appear in a recurring role on prime-time television, with her groundbreaking character, Cousin Geri, on the NBC sitcom The Facts of Life.

The book’s title ― I’m Walking As Straight As I Can ― has a double meaning, referring to both Jewell’s sexuality and her extraordinary struggle growing up with cerebral palsy. This candid memoir details her experiences from her traumatic birth in Buffalo, New York, to her rise to stardom as a stand-up comic to becoming a television star. She documents the harsh realities of show business by recounting the relentless discrimination and abuse she suffered at the hands of people she trusted. Her experiences in the shark-infested waters of Hollywood led her on a journey from the Comedy Store to the White House, followed by a downward spiral, tax problems, drug addiction, marriage, and an accident that nearly claimed her life.

When Deadwood creator David Milch recognized Jewell at a pharmacy, he offered her a role in his new HBO series on the spot, and she began to find hope and happiness once again. I’m Walking As Straight As I Can is an inspiring story, told with grace and self-deprecating humor, one that gives readers a rare glimpse of true courage and perseverance.

“Geri is a natural at whatever she does. It was a joy to work with her. It’s a joy to read this book.” ― Ian McShane, actor (Al Swearengen in Deadwood)

“Geri Jewell is not only a fabulous comedienne, actress, and motivational speaker, but advocating for people with disabilities has made a difference in the lives of millions. Lord knows she’s had an impact on my life! Granted, if she could just sit still, I could read her lips once in a while!” ― Kathy Buckley, Comedian and Actress

“I have known, admired, and adored Geri Jewell since the beginning of her comedy career. She is not only brilliant and funny, she has overcome an impossible obstacle in Hollywood; she’s a brunette.” ― Elayne Boosler, Comedian, Writer, and Founder of Tails of Joy

“I laughed, I cried, and then stood up and applauded when I finished reading Geri’s book. It’s much more than a great read, it’s a salute to the human spirit and an inspiration for anyone with a dream.” ― Anson Williams, actor/director

“I haven’t known a more inspirational life and talent than the one described in these pages. One of the true gems in my career is Geri Jewell.” ― Norman Lear

Geri Jewell has enjoyed a thriving career now spanning over three decades. She has been the recipient of many awards, including the 2005 Independent Living Legacy Award, and the 2006 Victory Award. She lives in Los Angeles, California.
Ted Nichelson is a writer, musician, scholar, business entrepreneur, and pop culture historian. He is the co-author of Love to Love You Bradys (ECW, 2009) with Brady Bunch star Susan Olsen. He lives in Los Angeles, California.

All copies are USED but in acceptable to good collection. Some have shelf wear, slight warping on lower spin and usage wear.