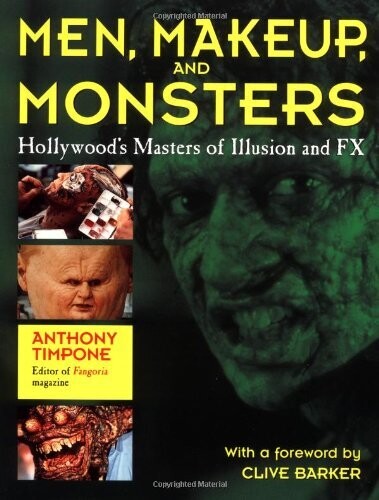 Cinema is illusion, and in this book you'll find profiles of twelve masters of screen magic, the best you can find in Hollywood, including:

-Dick Smith, a living legend whose work has graced The Godfather, The Hunger, and many other films

-Stan Winston, the man behind Terminator 2 and Aliens

-Tom Savini, whose work for George A. Romero's "Living Dead" movies made him a leader in the milieu of splatter effects

-Rick Baker, whose apes have conquered the screen in Greystoke, Congo, and Gorillas in the Mist

From foam latex to complicated puppetry, it's all here in this essential handbook. With many rare and illuminating photos-including eight pages in color-this book is invaluable for anyone interested in learning the craft of movie makeup and fascinating reading for anyone who ever wondered, How did they do that?

Fangoria magazine editor Timpone consolidates information that is available only in genre periodicals and "fanzines" to analyze the outfitting of zombies, bigfoot, aliens, maniacs, apes, skeletons, and other usually grotesque creations by imaginative, artistic, and technologically proficient movie makeup artists. After a foreword by writer/director Clive Barker (Hellraiser) and an introduction that pays tribute to such past masters of "monster" makeup as Lon Chaney and Jack Pierce, Timpone devotes each of his 12 chapters to an individual or team he has interviewed. Interviewees include Dick Smith (The Exorcist) Rick Baker (American Werewolf in London), Stan Winston (Aliens) Tom Savini (Dawn of the Dead), Chris Walas (The Fly), and Kevin Yagler (Child's Play). The initiated will understand when, in captions, Timpone labels these fellows "fright meisters" and "gore gurus." The heavily illustrated text is crammed with quotes and detailed, generally understandable analyses of technique that may well inspire future generations of fantasy film makeup artists.?Kim R. Holston, American Institute for Chartered Propery Casualty Underwriters, Malvern, Pa.

Copy is new from 1996 and has minimal shelf and transit wear, with a pristine interior.