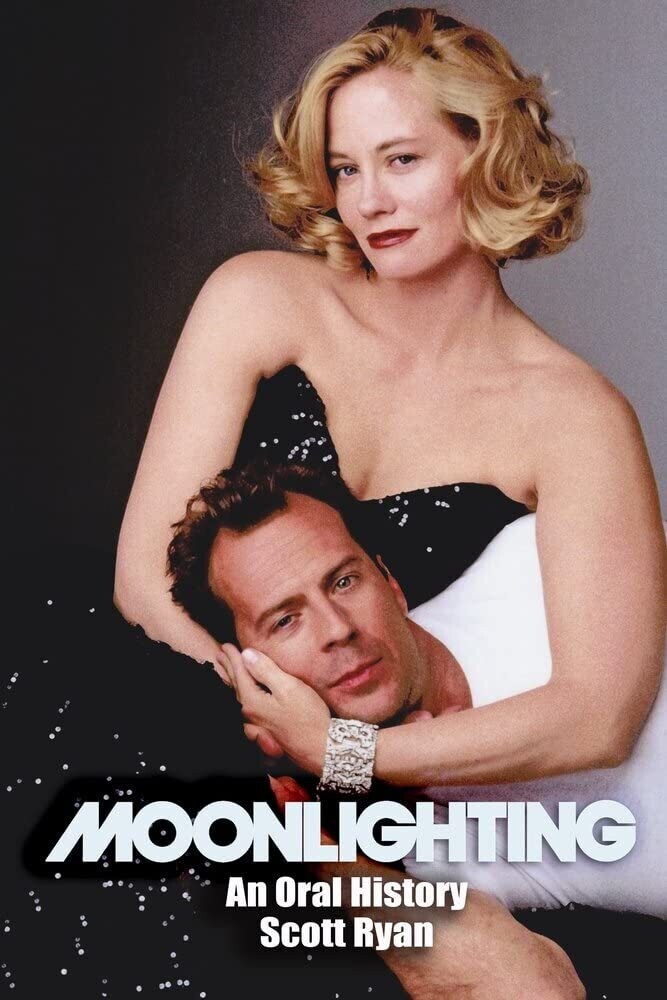 Once upon a time ABC-TV’s Moonlighting was among the most buzzed-about shows in the country, thanks largely to the bravado of creator Glenn Gordon Caron, who never met a television convention he didn’t want to break, and the sizzling on-screen chemistry between glamorous erstwhile film star Cybill Shepherd and a New Jersey bartender nobody had ever heard of before named Bruce Willis, who bickered and flirted ceaselessly on screen and engaged in epic off-screen battles that all these years later remain the stuff of Hollywood legend. This combustible blend of creative brilliance produced some of the most acclaimed, audacious, and innovative programming of the eighties, including a black and white tribute to film noir, with an introduction by Orson Welles; a parody of Shakespeare’s The Taming of the Shrew, written in iambic pentameter; an homage to The Honeymooners; and countless metafictive episodes breaking through the fourth wall — almost unheard of at the time for hourlong comedy-dramas. Without a doubt, Moonlighting helped pave the way for the era of prestige television we are now all enjoying. The real story of this pioneering television series and the extraordinary behind-the-scenes challenges, battles, and rewards has never been told — until now, Author Scott Ryan (The Last Days of Letterman, thirtysomething at thirty: an oral history, The Blue Rose, Scott Luck Stories) conducted over twenty interviews with the actors, writers, directors, and producers who made Moonlighting such a dynamic, unforgettable show, delving deep into their thoughts and feelings as they relive this magical moment in pop culture history in this full color oral history. New Interviews with: Cybill Shepherd (Maddie Hayes), Allyce Beasley (Ms. Dipesto), Curtis Armstrong (Herbert Viola), Glenn Gordon Caron Creator, Executive Producer, Writer Jay Daniel Executive Producer, Director Roger Director Writer, Producer, Season 4 Showrunner Allan Arkush Director Bob Butler and more.

"I was totally hooked by the first chapters. I was all in." —Glenn Gordon Caron, Creator

"Scott Ryan’s writing has a delightful bounce and captures the energy of Moonlighting. It really feels like an episode of the series to me." —Jay Daniel, Executive Producer of Moonlighting

"A book about the making of Moonlighting that interviews every major player? Inject it straight into my heart with the needle from Pulp Fiction." —Matt Zoller Seitz, NY Magazine TV critic

"Overall, it’s a great book for fans of Moonlighting and for people that like to know what happens behind the scenes." —Tanya, Book Review Crew

"Find Out The Real Story Of Moonlighting, The Popular TV Series That Launched Bruce Willis To Stardom" — Digital Journal

"Scott Ryan achieves a critical breakthrough as a result of all the behind the camera information he has amassed. His work mounts a challenge to the false public discourse about the problems that haunted Moonlighting." —Martha Nochimson, Author of Screen Couple Chemistry: The Power of 2, Professor Emerita Mercy College Associate

"Incredibly, for a show that was so popular, controversial, and influential, Moonlighting had never before been the subject of a serious book. It took more than thirty years since the series’ cancellation for the first one to be written. Fortunately, it’s terrific." —Mike Segretto, Psychobabble

"I had a blast reading this—I can’t imagine any half-hearted fan of the show not enjoying themselves." —HC Newton, The Irresponsible Reader

"Lots of stuff in this book I hadn't heard, particularly production details, like how they storyboarded important scenes with Bruce Willis, Cybill Shepherd and Mark Harmon where none were present at the same time (Willis shooting Die Hard, CS pregnant, plus they hated each other)." —Matt Zoller Seitz, Editor-at-large


"Some walk by night, some fly by day; Scott Ryan captures their stories perfectly, and he sheds new (moon)light on them all." —Lee Thacker, Setthetape.com

It was an honor to get to work on this book. Interviewing Cybll Shepherd, Glenn Gordon Caron, Curtis Armstrong, Jay Daniels and everyone else was a dream come true. Thanks to all the readers who helped to make this a #1 Kindle best seller.