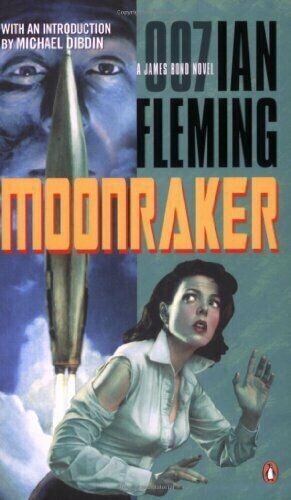 This Ian Fleming work provided the 1979 James Bond film Moonraker with its title and its villain, but not much else. Comparing the two is a fascinating experience for Bond fans.

As the super-patriot and war veteran who’s bankrolling Britain’s top-secret Moonraker rocket program, Sir Hugo Drax should be above reproach. But there’s more to this enigmatic millionaire than he lets on. When M suspects Drax of cheating at cards in an exclusive gentleman’s club, he sends Bond in to investigate. But exposing the deception only enrages Drax―and now 007 must outwit an angry man with the power to loose a nuclear warhead on London.

The mysterious death of the head of security at Drax’s missile base gives Bond the perfect opportunity to go undercover to find out the secret agenda of the supposed British war hero. With the help of another agent, the lustrous Gala Brand, 007 learns the truth about Drax’s battle scars, his wartime allegiances―and his murderous plans for the deployment of Moonraker.

The text in this edition has been restored by the Fleming family company Ian Fleming Publications, to reflect the work as it was originally published.

“I don’t know anyone who writes about gambling more vividly than Fleming.” ― The New York Times

“Fleming tells his story with both ease and grace, making the cloak and dagger episodes most plausible.” ― Library Journal

“Fleming is splendid; he stops at nothing.” ― New Statesman

“I couldn't put this book down.” ― Daily Telegraph

“Sheer good writing and skilful development. The game, its setting and the way Mr. Fleming leads up to it make me a convinced admirer of Bond―and of Mr Fleming.” ― Oxford Mail

Ian Fleming was born in London on May 28, 1908. He was educated at Eton College and later spent a formative period studying languages in Europe. His first job was with Reuters News Agency where a Moscow posting gave him firsthand experience with what would become his literary bête noire―the Soviet Union. During World War II he served as Assistant to the Director of Naval Intelligence and played a key role in Allied espionage operations.

After the war he worked as foreign manager of the Sunday Times, a job that allowed him to spend two months each year in Jamaica. Here, in 1952, at his home “Goldeneye,” he wrote a book called Casino Royale―and James Bond was born. The first print run sold out within a month. For the next twelve years Fleming produced a novel a year featuring Special Agent 007, the most famous spy of the century. His travels, interests, and wartime experience lent authority to everything he wrote. Raymond Chandler described him as “the most forceful and driving writer of thrillers in England.” Sales soared when President Kennedy named the fifth title, From Russia With Love, one of his favorite books. The Bond novels have sold more than one hundred million copies worldwide, boosted by the hugely successful film franchise that began in 1962 with the release of Dr. No.

He married Anne Rothermere in 1952. His story about a magical car, written in 1961 for their only son Caspar, went on to become the well-loved novel and film Chitty Chitty Bang Bang.