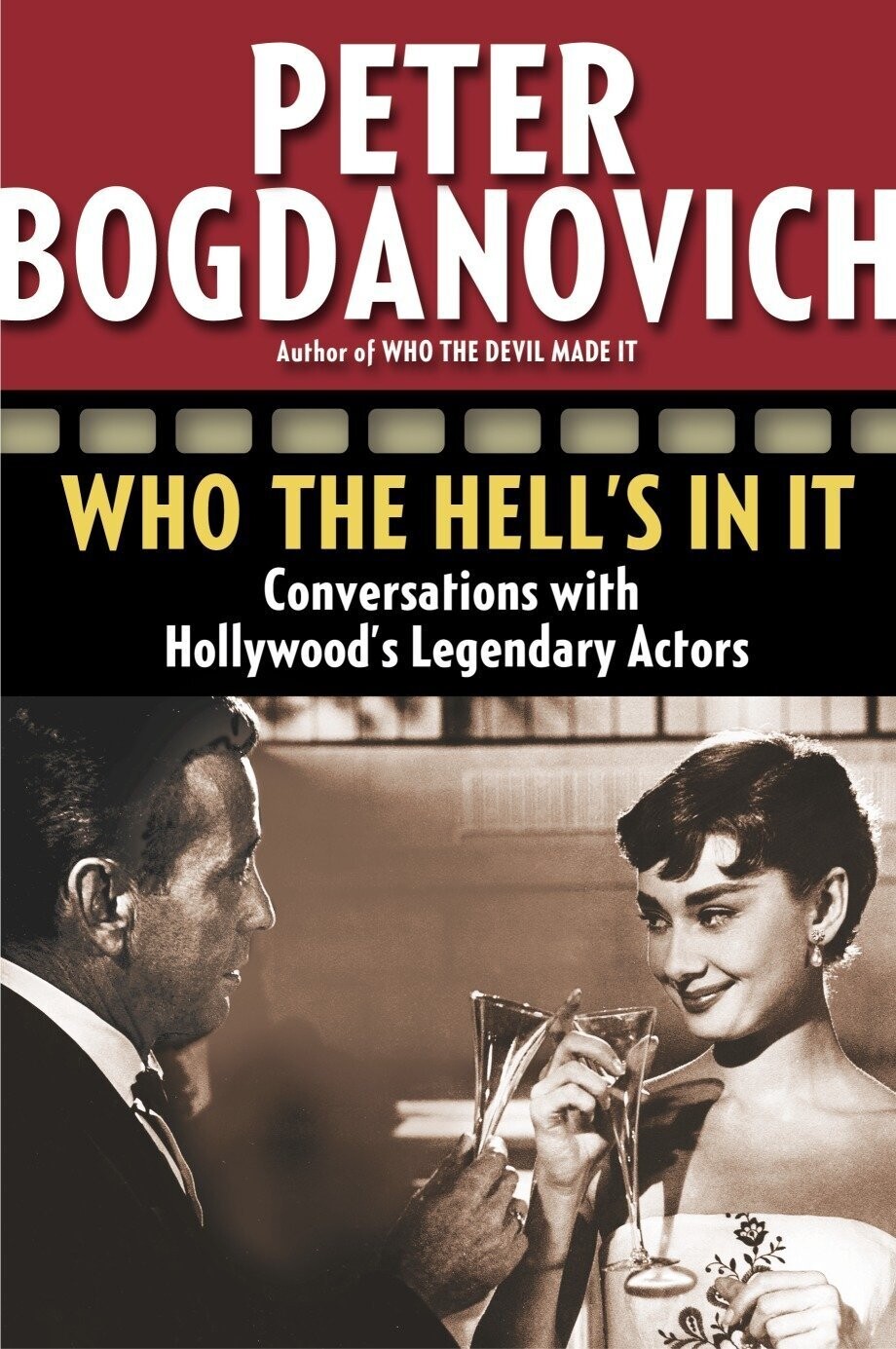 Peter Bogdanovich: Who the Hell's in It: Conversations with Hollywood's Legendary Actors (Paperback,NEW)

978-0345480026
$23.00
These twenty-six portraits and conversations are unsurpassed in their evocation of a certain kind of great movie star!
In stock
1
Product Details

Peter Bogdanovich, known primarily as a director, film historian and critic, has been working with professional actors all his life. He started out as an actor (he debuted on the stage in his sixth-grade production of "Finian's Rainbow); he watched actors work (he went to the theater every week from the age of thirteen and saw every important show on, or off, Broadway for the next decade); he studied acting, starting at sixteen, with Stella Adler (his work with her became the foundation for all he would ever do as an actor and a director).
Now, in his new book, "Who the Hell's in It, Bogdanovich draws upon a lifetime of experience, observation and understanding of the art to write about the actors he came to know along the way; actors he admired from afar; actors he worked with, directed, befriended. Among them: Lauren Bacall, Humphrey Bogart, James Cagney, John Cassavetes, Charlie Chaplin, Montgomery Clift, Marlene Dietrich, Henry Fonda, Ben Gazzara, Audrey Hepburn, Boris Karloff, Dean Martin, Marilyn Monroe, River Phoenix, Sidney Poitier, Frank Sinatra, and James Stewart.
Bogdanovich captures--in their words and his--their work, their individual styles, what made them who they were, what gave them their appeal and why they've continued to be America's iconic actors.
On Lillian Gish: "the first virgin hearth goddess of the screen . . . a valiant and courageous symbol of fortitude and love through all distress."
On Marlon Brando: "He challenged himself never to be the same from picture to picture, refusing to become the kind of film star the studio system had invented and thrived upon--the recognizable human commodity each new film was built around . . . The funny thingis that Brando's charismatic screen persona was vividly apparent despite the multiplicity of his guises . . . Brando always remains recognizable, a star-actor in spite of himself."
Jerry Lewis to Bogdanovich on the first laugh Lewis ever got onstage: "I was five years old. My mom and dad had a tux made--I worked in the borscht circuit with them--and I came out and I sang, 'Brother, Can You Spare a Dime?' the big hit at the time . . . It was 1931, and I stopped the show--naturally--a five-year-old in a tuxedo is "not going to stop the show? And I took a bow and my foot slipped and hit one of the floodlights and it exploded and the smoke and the sound scared me so I started to cry. The audience laughed--they were hysterical . . . So I knew I had to get the rest of my laughs the rest of my life, breaking, sitting, falling, spinning."
John Wayne to Bogdanovich, on the early years of Wayne's career when he was working as a prop man: "Well, I've naturally studied John Ford professionally as well as loving the man. Ever since the first time I walked down his set as a goose-herder in 1927. They needed somebody from the prop department to keep the geese from getting under a fake hill they had for "Mother Machree at Fox. I'd been hired because Tom Mix wanted a box seat for the USC football games, and so they promised jobs to Don Williams and myself and a couple of the players. They buried us over in the properties department, and Mr. Ford's need for a goose-herder just seemed to fit my pistol."
These twenty-six portraits and conversations are unsurpassed in their evocation of a certain kind of great movie star that has vanished. Bogdanovich's book is a celebration and a farewell."From the Hardcover edition.

“[Peter Bogdanovich] knows practically everything about the movies…this book is among the richest (and most delightful) ever written about Hollywood. Deeply elegiac.”
–Ben Schwarz, Atlantic Monthly

“An invaluable archive of a nearly lost cinematic world that director-actor Bogdanovich has himself intimately inhabited for some 50 years.”
–Alan Moores, Booklist

“[Bogdanovich] treats his subjects with sympathy throughout. What comes through is Bogdanovich’s abiding love of cinema…”
– Library Journal

“Those who like classic movies will fall in love with this book…[and] find themselves wishing for more.”
– Publisher’s Weekly

“Just as he did with Who the Devil Made It?, Peter Bogdanovich is keeping history alive with Who the Hell’s In It? He was there at the crossroads, between the Old and New Hollywoods, as an actor, then as a repertory programmer, a critic, a director, and a confidante. And always as a fan, whose love for movies has only increased over the years. There are so many wonderful memories contained in these pages, so many lovingly rendered details, so many engrossing stories. And somehow, all of the actors and actresses here, from Brando to Clift, from John Wayne to John Cassavetes, seem at once human and larger than life. Who the Hell’s In It? is indispensable.”
–Martin Scorsese

“What a treat this book is. Funny, intimate, thoughtful, surprising. And one helluva read. The conversations and opinions contained here are as informative as they are refreshing . . . These are the true legends who earned the title legitimately. With this book, their alchemy is preserved for posterity.”
–Rex Reed

“A completely unique, moving book full of Bogdanovich’s well-known expertise and limitless affection for anyone and anything to do with good movies.”
–Wes Anderson

“A wonderful book, both personal and partisan, by a true enthusiast and an insider, who is not only one of the great chroniclers of the movies but one of its most gifted practitioners.”
–Paul Theroux

“Peter Bogdanovich has elicited the humanity and personality behind the Personality that became the essential building block of stardom. Why was Marion Morrison John Wayne? The book gives us many insights–but never on the level of gossip or psychiatry. And to hear actors such as these, legends and monuments most of them, discuss their craft, their workmanship, very simply their job–you never see that.”
–David Chase

“ If you love movies, I bet you’ll love this book.”