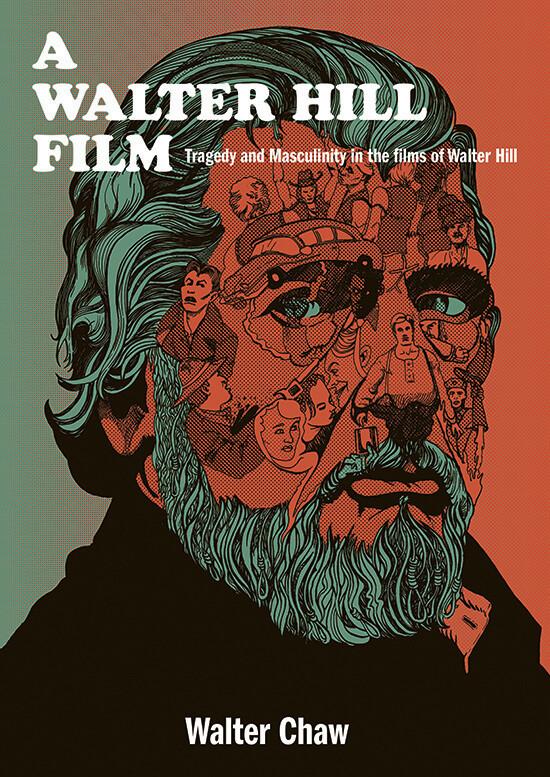 A new edition created and printed by MZS Press, this book is scheduled for release end of November 15, 2022!!

The author is Walter Chaw, film critic for Film Freak Central and a contributor to The New York Times, Vulture, NPR and many other publications. The James Joyce of crime fiction James Ellroy wrote the introduction. The foreword is by Larry Gross, Hill's writing partner on 48 HRS. The book also includes a note from Edgar Wright (Shaun of the Dead, Hot Fuzz, and Last Night in Soho.

From the author: "A Walter Hill Film is a 400-page critical study of Walter Hill’s films and early screenplays that began, as a lot of these projects do, with a question. I had recently gotten the opportunity to watch The Warriors and Streets of Fire on 35mm archival prints and even though I had seen them before, revisiting them at this time, in that format, was… visceral? Kinetic? Exhilarating. All of those things in a way almost physical, and I wanted to know what it was about these pictures - and their director, Walter Hill, that could inspire so specific a response. I felt like I was on fire. Along with a couple hundred devotees, I floated out of the auditorium. Who the hell was this guy?

So I looked for books about Hill and discovered that there was one - but it was in Italian. There might be another in German, I’m not sure. But there had been no serious critical studies of him in English. Charles Taylor wrote an incredible essay about Robert Culp’s Hickey & Boggs, Hill’s first produced screenplay, but aside from a few rich interviews and archival videos, there wasn’t much scholarship. Part of that has to do I think with Hill’s own aversion to dwelling too much on his own work; but mostly, I think Hill’s films are seen as merely action movies, ‘guy flicks’ easily digestible and just as easily disposable. The more I watched his movies, though, the more I saw Hill as continuing in the tradition of filmmakers like Nicholas Ray, Sam Peckinpah, Howard Hawks and, especially, Robert Aldrich. Aldrich who, born to wealth and privilege, gave it all up to make ‘guy flicks’ that were nonetheless rooted in social awareness and protest.

I’m not an archivist, not a historian, really, and though I enjoy interviewing my heroes, I wouldn’t say I have a particular gift nor interest in it. What I can do, though, is watch a body of work and identify throughlines in it that speak to me. I can, in other words, write about myself. I think that’s what good critics do. A Walter Hill Film is a study of a career that has revealed itself to me as extraordinarily sensitive to issues around race and gender; a “man’s man” director actually brave enough to show things as they really are in our world: broken, hostile towards culturally-proscribed underclasses. with pieces consistent through what is now a seventh decade. Of course James Ellroy wrote the introduction for it.

I spoke with Hill throughout the long, four-year process of this volume, and to a few of his collaborators as well, but this isn’t

a “behind-the-scenes” or 'making of' memoir. It’s a process of unpacking the life’s work of an important American artist. It’s a book about figuring out something about these movies that set me on fire."

A Walter Hill Film is being published by MZS Press, Matt Zoller Seitz's arts books imprint. The store is offering a limited number of these hardcovers signed by the author.