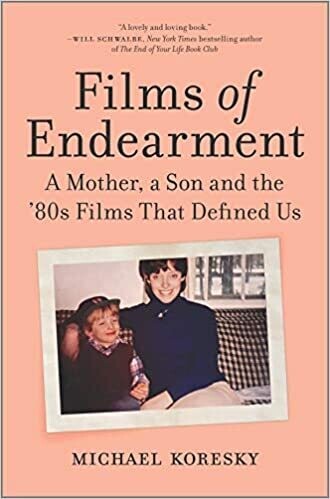 An Esquire Best Book About Hollywood

“A lovely and loving book.”—Will Schwalbe, New York Times bestselling author of The End of Your Life Book Club

"I'm not sure I have ever read a book about movies that is as tender and open-hearted as Films of Endearment."—Mark Harris, New York Times bestselling author of Mike Nichols: A Life

A poignant memoir of family, grief and resilience about a young man, his dynamic mother and the '80s movies they shared together

Michael Koresky's most formative memories were simple ones. A movie rental. A mug of tea. And a few shared hours with his mother. Years later and now a successful film critic, Koresky set out on a journey with his mother to discover more about their shared cinematic past. They rewatched ten films that she first introduced to him as a child, one from every year of the '80s, each featuring women leads.

Together, films as divergent as 9 to 5, Terms of Endearment, The Color Purple and Aliens form the story of an era that Koresky argues should rightly be called "The Decade of the Actress."

Films of Endearment is a reappraisal of the most important and popular female-driven films of that time, a profound meditation on loss and resilience, and a celebration of the special bond between mothers and their sons.

"I'm not sure I have ever read a book about movies that is as tender and open-hearted as Films of Endearment. It is many things at once--a son's rich and loving portrait of his mother, a gay man's gentle coming-of-age story, and an astute and generous critic's rescue mission. By exploring unfashionable 'women's pictures' from an unfashionable decade and raising them to their proper place in movie history, Michael Koresky gives us a new way to look at the kind of movies we don't talk about enough even though they live inside so many of us. His deeply touching book reminds us that all movies are personal, and that any good film can be a gateway to revelation." — Mark Harris, New York Times bestselling author of Mike Nichols: A Life

"This is a book about the movies by a critic whose generosity and affection for film is inherited and revisited with loving detail. This is a book about a mother, Leslie—about her joys, her life, and how she furnished a home on Walnut Road full of fierce attachments, pure fun, and Jane Fonda. I was unprepared for how moving this experience would be. I appreciate Michael’s recall for that magical thing only the movies can provide—a sort of invincible stupor." —Durga Chew-Bose, author of Too Much and Not the Mood

"Films of Endearment is a lovely and loving book, a son's tribute to his remarkable mother and to the 1980s films and actresses that gave the two of them a common language and timeless bond. Koresky creates a marvelous tapestry that weaves fascinating stories about the making of these films with tales from his mother’s life and from his own, growing up gay in an extraordinary, ordinary American household. When mother and son decide to rewatch the movies from this era that they most love, they discover a powerful truth: that the greatest gift parents and children can give one another at any age is to share their true selves.”—Will Schwalbe, New York Times bestselling author of The End of Your Life Book Club


“Anytime I’d arrive from wherever I was living to Philadelphia, where I’m from, there was always this moment of visceral comfort at the exclamation of joy in my mother’s voice even before I stepped across her threshold. This book reconstitutes all of that warmth, love, and familiarity. Only, with an ingenious addition. This is simultaneously the story of Michael Koresky’s life with the woman who raised him, the story of her life, and a fragrant rumination on her movie memories and cinematic counterparts. Koresky allows the movies to evoke old feelings as well as expand our understanding of a bygone filmmaking priority: tremendous women, tremendously human women. More than once, I wiped my eyes and concluded that they don’t make ’em like they used to. That should change.” —Wesley Morris, Critic at Large, The New York Times

"A spellbinding journey through the cinema of the 80s and its remarkable female protagonists as seen through the eyes of a mother and son. Leslie, the New England working woman and mother who instilled a passion for movies in her child, is no less remarkable in her way than the heroines of Working Girl, 9 to 5, Aliens, or The Fabulous Baker Boys. Superb evaluations of the films lead seamlessly into portraits of family life, reflections on loss and secret yearnings, that are a testimonial to the way films nourish and connect us."—Molly Haskell, author of Frankly My Dear: “Gone With the Wind” Revisited

“Films of Endearment is a masterful blend of memoir and movie appreciation. Through their shared language of 80s film, a son seeks to unlock the backstory of his number one leading lady – his mom. A much needed tribute to the strong female characters on screen and in our homes, whose love and badassery shape the people we become.”—Meredith May, author of The Honey Bus: A Memoir of Loss, Courage and a Girl Saved by Bees

"Michael Koresky brings us on a nostalgic, incisive, and deeply moving journey through the films of the 1980s, a decade when unlikely leading ladies delivered performances of a lifetime. Koresky's mother gets top billing above Jane Fonda, Sigourney Weaver, and Shirley MacLaine, and deservedly so: A force in her own right, she is the unsung hero from whom he inherited a life-altering love of movies. Written with clear eyes and compassion, this book is film criticism at its finest and most personal."—Erin Carlson, author of Queen Meryl: The Iconic Roles, Heroic Deeds, and Legendary Life of Meryl Streep

"One of our most generous and engaged critics, Koresky has written a beautiful book that is at once a deeply touching and open-hearted tribute to his relationship with his mother, an emotionally naked rebuke to snobbishness, and an ardent (and probing) love letter to the studio filmmaking of a traditionally maligned decade." —Ari Aster director of Hereditary and Midsommar

"Films of Endearment is a profoundly moving memoir, and a loving tribute to the power of cinema to connect and transform us. Koresky is a stunning writer."—Peter Kispert, author of I Know You Know Who I Am

“Part memoir, part critical theory, part film festival, all heart, Michael Koresky has written something wholly original. As a young boy my mother practically tied me to a chair to watch a movie about a singing nun who leaves the abbey to become a governess and finds herself in the process. I too found myself — a lifelong movie fan. I will definitely be gifting this love letter to my mother. I can’t think of a better thank you.”—Steven Rowley, bestselling author of Lily and the Octopus and The Guncle

"A skilled film critic, Koresky guides readers through salient plot points instead of rehashing entire films, but his real talent is using cinema as a starting point for conversation. This intimate, probing work will appeal to hard-core cinephiles, lovers of memoirs, and many other readers."—Library Journal

"A moving portrait of a bond film lovers will understand: between a cineaste and the people who nurtured that love."—Kirkus Reviews


"A perfect Mother's Day read for film lovers...“Films of Endearment” moves with a beautiful universality that will inspire readers not only to revisit the '80s films of the book, but to set out on film journeys of their own."—USA Today

"Oh, this one is a treat. Thoughtful, intimate, and often moving, Koresky’s essays about watching movies with his mother are winning."—Esquire

MICHAEL KORESKY is a film critic and filmmaker, and editorial director at New York’s Museum of the Moving Image. He has held staff editorial positions for Film at Lincoln Center and The Criterion Collection, where he continues to work as a freelance programmer. He has been named one of the “100 Most Influential People in Brooklyn Culture” by Brooklyn Magazine.