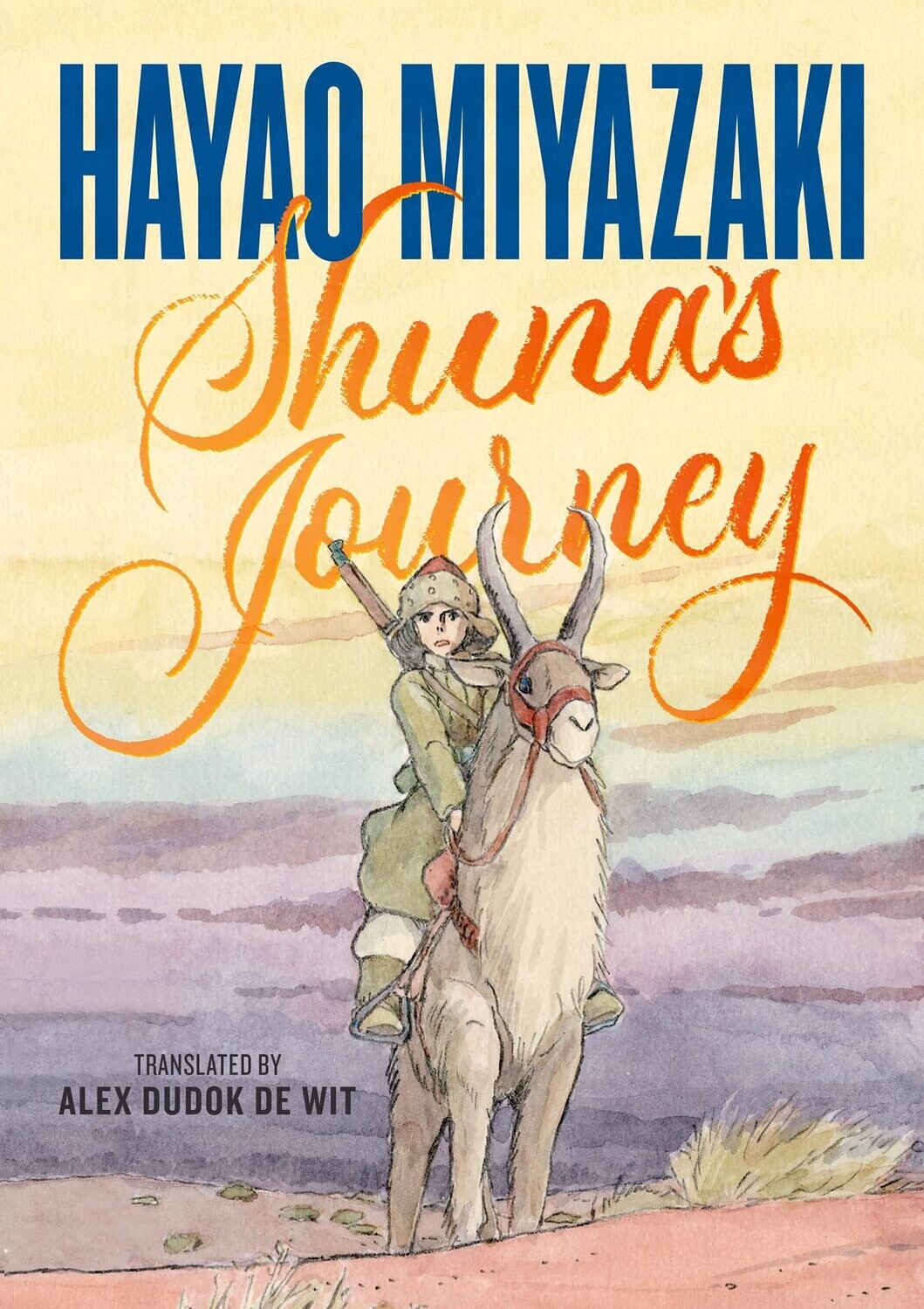 From legendary animator Hayao Miyazaki comes Shuna's Journey, a new manga classic about a prince on a quest for a golden grain that would save his land, never before published in English!

Shuna, the prince of a poor land, watches in despair as his people work themselves to death harvesting the little grain that grows there. And so, when a traveler presents him with a sample of seeds from a mysterious western land, he sets out to find the source of the golden grain, dreaming of a better life for his subjects.

It is not long before he meets a proud girl named Thea. After freeing her from captivity, he is pursued by her enemies, and while Thea escapes north, Shuna continues toward the west, finally reaching the Land of the God-Folk.

Will Shuna ever see Thea again? And will he make it back home from his quest for the golden grain

"Every scene in this cinematic work stands apart with breathtaking watercolors aided by expert staging and blocking... A reimagined folktale as grand as its painted visuals are sublime."―Kirkus, starred review

"This book was published decades ago in ­Japanese, but is now finally published in English, and it will inspire some long-overdue ­appreciation...For Miyazaki fans, as well as any readers who would enjoy fantastic stories that unfold in surprising ways."―School Library Journal, starred review.

"Gorgeous... Shuna's Journey foreshadows much of Miyazaki's later work while still managing to be a complete standalone story in its own right." ―Entertainment Weekly

"Beautiful...we rely on the children in his stories to explain his beautiful, broken worlds to us and to assure us that they will fix them.”―The New Yorker online

Born in 1941 in Tokyo, Japan, Hayao Miyazaki cofounded Studio Ghibli in 1985 with Isao Takahata. Among his eleven animated features, Spirited Away (2001) broke every box-office record in Japan, and won the Golden Bear at the 2002 Berlin International Film Festival and the 75th Academy Awards for Animated Feature Film. Howl’s Moving Castle (2004) received the Golden Osella award at the 2004 Venice International Film Festival. Miyazaki was awarded the Golden Lion for Lifetime Achievement at the 2005 Venice International Film Festival. The Wind Rises (2013) was nominated for the 86th Academy Award for Animated Feature Film. In 2014, the Board of Governors for the Academy of Motion Picture Arts and Sciences presented him with a Governors Award for lifetime achievement. He is currently working on a new production.

Alex Dudok de Wit is the Associate Editor at Cartoon Brew. He is an animation correspondent for Sight & Sound. His writing has also appeared in Vulture, Little White Lies, The Telegraph, The i, The Independent, Time Out, Index on Censorship and elsewhere, including specialist animation publications like Skwigly and ASIFA Magazine. He also translates from Japanese as part of Art Translators Collective. He is based in London, UK.