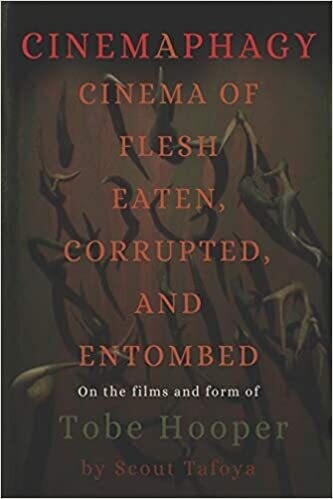 SIGNED Cinemaphagy: Cinema of Flesh Eaten, Corrupted, and Entombed: On the Films and Form of Tobe Hooper (Paperback NEW)

978-1939282460
$40.00
Scout Tafoya's Cinemaphagy is the study of Tobe Hooper’s working life, his bountiful creativity, and his ardent cinephilia
In stock
1
Product Details

He directed The Texas Chain Saw Massacre, the most infamous and visceral horror film of all time. He directed Poltergeist, one of the most successful ghost stories of the 20th century. He was called a Master of Horror, and he worked with screen legends James Mason, Neville Brand, Karen Black, Fred Willard, Dennis Hopper, Anthony Perkins, Mel Ferrer & Marie Windsor. He elegantly navigated the works of pulp legends Ambrose Bierce, Stephen King, Cornell Woolrich, & Richard Matheson.

And yet Tobe Hooper is one of the most unsung film artists of the last fifty years.

How did the man famous for creating some of the most endearing images of terrible things, who did for the hardware store what Jaws did for the beach, become someone in need of rescue?

Scout Tafoya's Cinemaphagy is the study of an artist’s working life, his bountiful creativity, his ardent cinephilia, his prolific career in film and television, his lasting influence beyond the saw. Horror movie directors are too frequently pigeonholed as purveyors of the macabre but in truth Hooper was one of the most boldly experimental genre filmmakers in the game, fusing a Texan psychedelia with an earnest classical style gleaned from years watching classic films.

Every film Hooper made, no matter how thankless, no matter how silly the assignment on paper, became a rich, roiling text on the political underside of the American cinema. No one made movies about cinema less ostentatiously and with more love. Movies with lurid titles like Spontaneous Combustion and The Mangler hide essays about the history of labor, Cold War iconography, and the corrosive legacy of a culture built on lies. Tobe Hooper is still too often represented as a man with a monolithic legacy, the creator of one great film and nothing else. It’s well past time the depth and breadth of his obsessions and his gifts were discussed by a culture that ignored his years of hard work. Hooper directed The Texas Chain Saw Massacre but that is literally just the start of one of the most exciting, free, and expressionistic bodies of work in the American cinema.

All copies are new and signed by author Scout Tafoya.