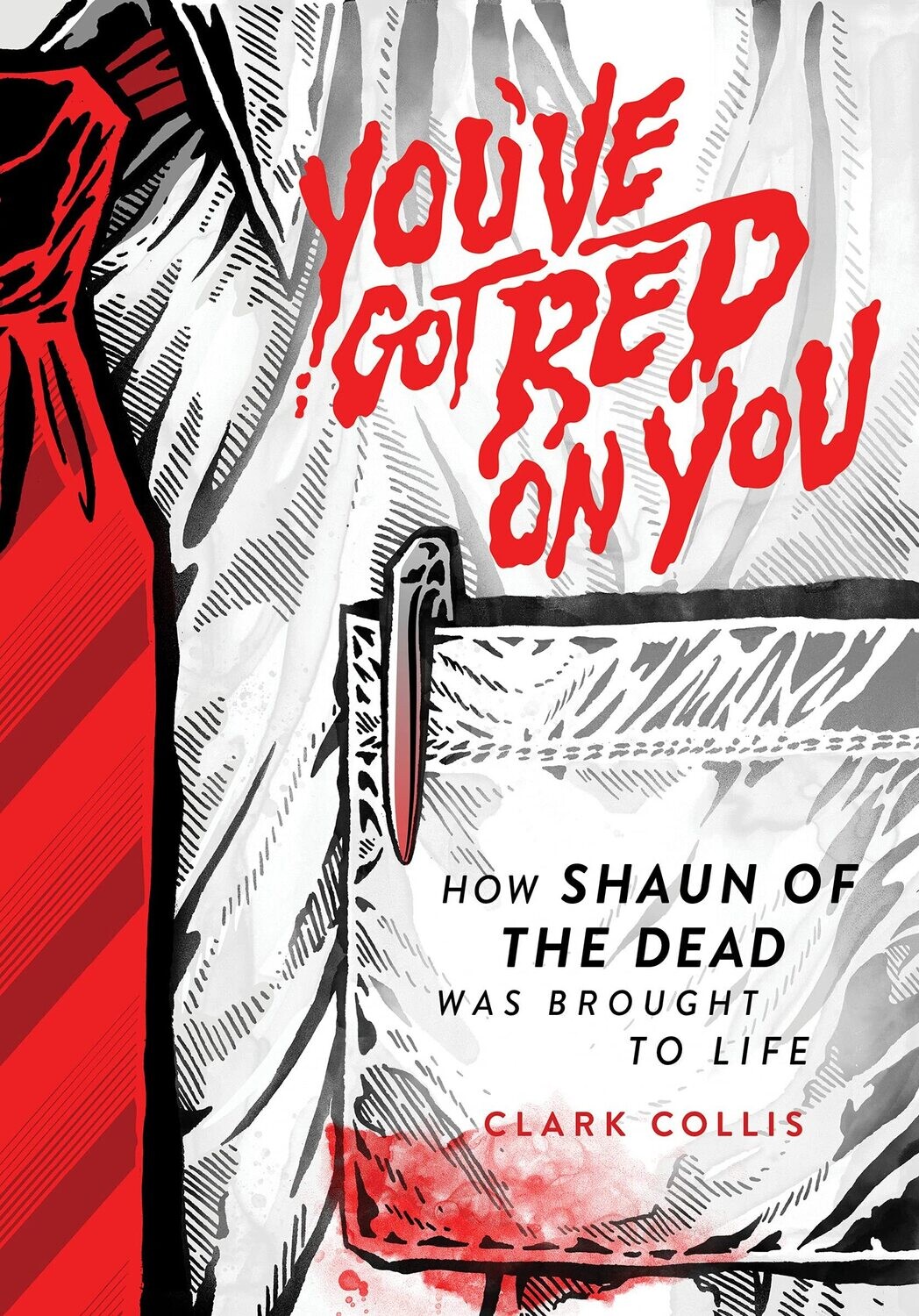 You've Got Red on You: How Shaun of the Dead Was Brought to Life (Hardcover, NEW)

How did a low-budget British movie about Londoners battling zombies in a pub become a beloved global pop culture phenomenon?

You’ve Got Red on You details the previously untold story of 2004’s Shaun of the Dead, the hilarious, terrifying horror-comedy whose fan base continues to grow and grow. After speaking with dozens of people involved in the creation of the film, author Clark Collis reveals how a group of friends overcame seemingly insurmountable odds to make a movie that would take bites out of both the UK and the US box office before ascending to the status of bona fide comedy classic.

As Pegg’s zombie-fighting hero Shaun would say, “How’s that for a slice of fried gold?”

"Edgar Wright, Simon Pegg, Nick Frost, and more offer unique insights into the making of their 2004 zombie comedy classic, Shaun of the Dead. The 424-page book traces the film’s story, from late-night pub conversations about surviving the zombie apocalypse to an unexpected hit at Comic-Con 2004." — Rolling Stone

"An exemplary movie retrospective, one which combines an astonishing amount of research with a real flair for storytelling. 5/5 stars." — SFX

"Just *look* at Clark Collis's stunning book on the making of Shaun Of The Dead. The red metallic page edging, the cover art, the inside... it's a thing of beauty. In other words: how's that for a slice of fried gold?" — Ali Plumb, BBC Radio 1

"...almost 20 years later, Shaun of the Dead is a cult classic. Director Edgar Wright and actors Simon Pegg and Nick Frost inform the bulk of the narrative with hilarious remembrances; Quentin Tarantino, Eli Roth, and the late George A. Romero are quoted here too...resulting in a work [that will be] wildly entertaining to horror buffs." — Library Journal, starred review

"A really entertaining read and, if you’re a fan of the film, very illuminating on the struggles to not only get it made, but also to have the film be taken seriously. If you’ve ever wanted to make a movie, you’ll learn a lot in You’ve Got Red on You.” — Shaun of the Dead co-writer/director Edgar Wright

"So many relationships grow and expand over the course of Collis' book that readers will find themselves falling in love with Shaun of the Dead – to say nothing of Wright, Pegg, and Frost – all over again, twenty years on. 4/4 stars." — Starburst

"[You've Got Red on You] gives unparalleled access to near everyone involved with the movie, plus sketches, script drafts, storyboards, and BTS photos aplenty." — Total Film

"One of the best books of the year." — Buzz Magazine

"If you’re a fan of Shaun of the Dead or a filmmaker influenced by the films of Wright this is essential reading. It is so good we read it twice before this review." — Screen Anarchy

"One of the best [pop culture books this holiday season] is You’ve Got Red on You, Clark Collis’ breezy-yet-thorough look at 2004’s horror-comedy Shaun of the Dead…it instantly takes its place in the upper echelon of making-of books." — Josh Sewell, Times-Georgian

"Shaun of the Dead is one of the most widely-discussed horror movies of the 2000s. Released on the heels of Wright’s latest film, Last Night in Soho, You’ve Got Red on You is the definitive account of how Shaun of the Dead came to be, featuring new interviews from the core creative trio, as well other key members of the cast and crew. Take this book with you the next time you book a table 'at the place that does all the fish.'" — Yahoo (the "It List")

"Like a slap of a cricket bat to the face, Clark Collis’s terrific new book, You’ve Got Red on You, takes us on a deep dive into the making of Edgar Wright’s classic horror/comedy Shaun of the Dead. It’s a fantastic view into the effort, heartache and exultation of the filmmaker’s struggle to create a groundbreaking and gore-drenched film." — Phantasm writer/director Don Coscarelli

"The intricately rendered and definitive story behind the creation of Edgar Wright’s cinematic rom-zom-com tour-de-gore’s that is Shaun of the Dead, recounted with affection by the one and only Clark Collis." — The Nun director Corin Hardy

"If you are an Edgar Wright fan, especially if you are a Shaun of the Dead fan, check out Entertainment Weekly scribe Clark Collis' exhaustive (but not exhausting) new book, which takes you deep to the heart of everything Shaun! A fascinating deep dive into one of the best horror comedies of all time.” — director Mick Garris (Stephen King's The Stand / Tales from the Crypt)

"Exhaustively researched and brimming with funny, fascinating stories I didn't know, this book is must read, not just for hardcore fans, but for anyone who's interested in the creative process." — author Melissa Maerz (Alright, Alright, Alright: The Oral History of Richard Linklater's Dazed and Confused)

"Rejoice Shaun of the Dead and film fans! You've Got Red on You is an in-depth, thoroughly enjoyable, and inspiring story of the making of the classic film. Collis expertly weaves interviews from cast and crew with other first hand accounts, starting before line one of the screenplay was written. I inhaled this book with a smile on my face. Now let's head down to the Winchester for a pint." — author Paul Tremblay (A Head Full of Ghosts / The Cabin at the End of the World)

“I was a huge fan of Shaun of the Dead. It was my favourite movie of that year. Their jokes were like perfectly placed time bombs.” — Quentin Tarantino

“We didn’t ever really want to parody zombie movies. We wanted to make a zombie movie.” — actor Simon Pegg

"There were zombies getting off with each other. There were loads of zombie relationships. Two zombies got together on the pool table." — producer Nira Park

“I heard it was a romantic-comedy with zombies, and I was like, well, that sounds sh*t.” — actor Rafe Spall

CLARK COLLIS grew up in Edgar Wright’s home town of Wells and, like the director, is a former employee of Wookey Hole Caves. He studied history at Cambridge University, and is currently a senior writer at Entertainment Weekly magazine in New York.